The HALO unit is comprised of a circular tank suspended from the crane which contains water in the annulus. A radio controlled thruster is set with its propellers in the water. Spinning water around in the tank clockwise or anticlockwise produces a torque which turns the load in the opposite direction. 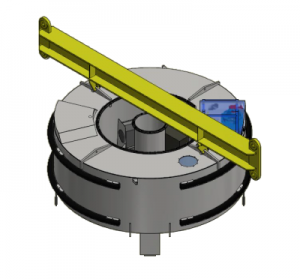 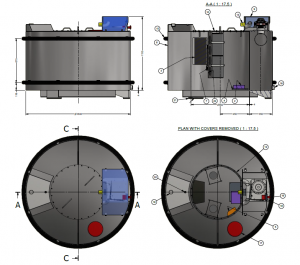 The load can now be controlled from above by remote control rather than from below by human contact.

The HALOs are extremely robust and can be controlled either by a crane driver’s foot pedal or by a banksman’s hand set and the crew can remain at a safe distance. The heavy moving part is just water which, if it leaks, does not present a significant safety hazard.

There are several methods of transferring the torque from the HALO to the load which depend on the load type and the environment. The system has been successfully tried with large and small containers and other types of load.

The design of a small unit for use with loads up to 5Te, a medium sized unit for up to 10Te and a larger unit for use up to 20Te has been completed, built and tested.

See videos below demonstrating the various units in use.